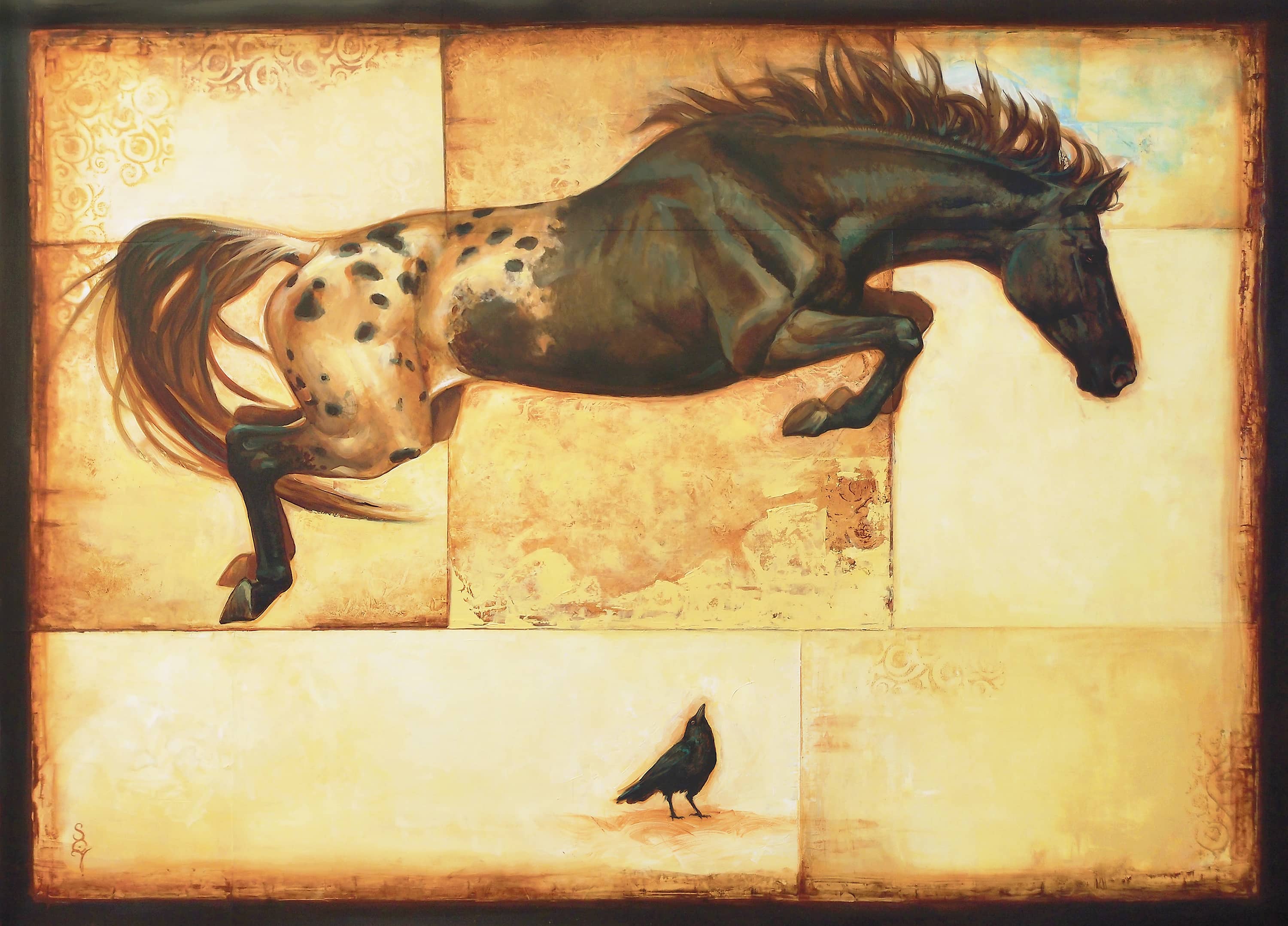 “Horse Over Crow is a large oil painting (36″ x 50″) rendered in rust and amber hues. In this work, a Blanket Appaloosa jumps over a crow forming a protective arch, while the crow calmly watches from below.

I’ve always had a strong affinity for horses, in fact equine art makes up roughly half of the subject matter I’ve painted. 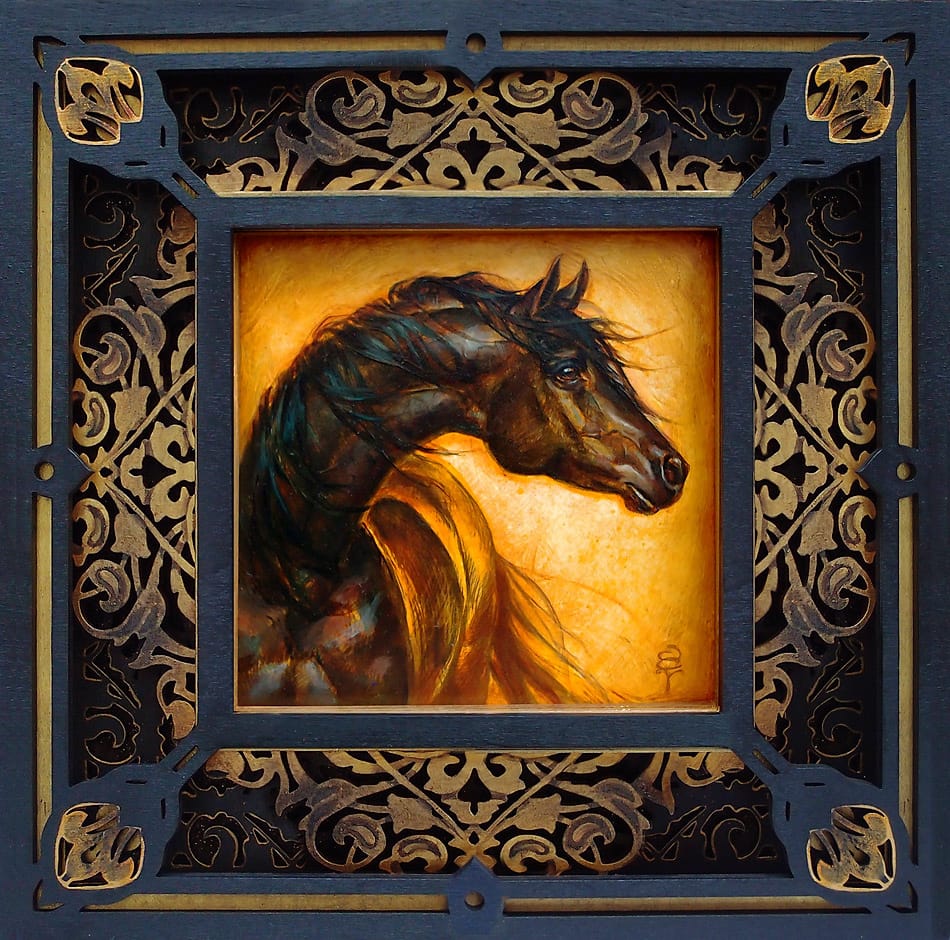 I think my affection for equines stems from a combination of simple admiration for the “honesty” of their architecture (nothing hidden by a thick coat—bone, sinew and muscle readily available for observation) and the innate symbolism exuded by a creature all at once in possession of speed, power, and grace.

As a child growing up within the confines of an economically depressed urban environment, horses became my “spirit animal” and an imaginary vehicle of escape. All I had to do was pick up a pen, find a blank piece of paper and I had a powerful and impossibly beautiful vessel ready to transport me to lands unseen.

I’m obviously not alone in ascribing deep value to The Horse. Since the first humans climbed onto the backs of wild horses in the Eurasian Steppes, people have recognized the power and potential of equines. It was clearly potential fully realized, as horses became the principle means driving human progress and expansion for over 6,000 years.

Only with the advent of the automobile did horse culture begin to decline, maintained in contemporary times by an array of stewards, from wealthy hobbyists to subsistence farmers in pocket cultures around the world.

Today, though the vast majority of humans no longer depend on horses as a primary means of transportation or agricultural labor, they remain an indelible emblem in our lives, ever present in film, literature, monumental sculpture, and paint.

The Concept Behind the Oil Painting

Most of my oil paintings start as simplified ideas; shadow sketches before I flesh them out into a finished artwork. With “Horse Over Crow” I knew three things from the beginning: I wanted to portray a horse jumping as if in mid-flight, I wanted to paint a Appaloosa horse, and I wanted to include a bird in the painting, specifically a crow.

For me, birds in my artwork act as witnesses. I imagine them able to gather details about land-dwellers from a perspective that is almost omniscient in nature. In this way, they function as symbolic vessels of history and keepers of a type of esoteric knowledge. This isn’t too far removed from the deference Indigenous American culture has often shown crows and ravens, so including one here is fitting.

The Appaloosa: a Horse So Beautiful, It Was Stolen

The Appaloosa is an “Indian” horse originally developed by the Nez Perce people, and it’s a perfect example of how humans advanced their cultures through equine power. The original wild horse which once inhabited North America had disappeared 10,000 years prior to modern equines. With the invasion of Spanish conquistadors, they were reintroduced and rapidly adopted by Indigenous ethnic groups. 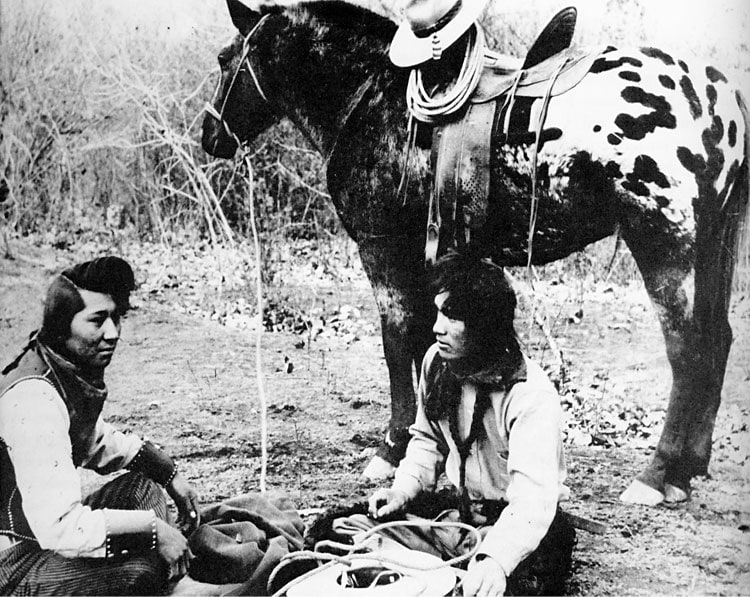 Among Native Americans, the Nez Perce appear to have been the most ambitious horse masters, establishing selective breeding programs that created high quality animals sought out by other tribes and white settlers across the Northwest. At a time when an average horse could be purchased for the equivalent of $15, the Nez Perce were able to command hundreds of dollars for a single animal, and were often reluctant to sell one.

Horses transformed the Nez Perce from a fishing culture to a wealthy horse nation with great influence and power; however this was not enough to stave off the inevitable wave of settlers that was pushing from the east to confiscate Indigenous land.

In the 1870’s war broke out as a result of rising conflict between the Nez Perce and invading settlers, and this resulted in the loss of their prized horses and the near eradication of the Appaloosa breed by the U.S. government. The breed’s survival (in any form) can perhaps be attributed to the great care the Nez Perce had taken to produce truly striking animals which would be coveted enough for preservation by a new set of enthusiasts.

Though horse and tribe had been nearly eradicated, specimens from the once magnificent Appaloosa herds surfaced on settlers’ farms, in rodeos, and in Wild West shows in the early 20th century. Their stamina and striking coats spurred new interest in preserving the unique horses, and a dedicated horse club for that purpose was established in the late 1930’s.

The Nez Perce never regained their stature as the breeders of the Appaloosa horse, and over the decades, the whims of the new influencers of the breed resulted in a somewhat different animal than the original.  Arabian, Thoroughbred, and, Quarter Horse blood were added to meet the desires of the show ring, herding and rodeo work. The emphasis on beautiful colors became a more important feature than other characteristics once exhibited in the original Nez Pierce animal.

By the 1990’s, the Nez Perce decided to create a new breed that more closely resembled their historic mounts, this breed has been named the Nez Perce Horse. 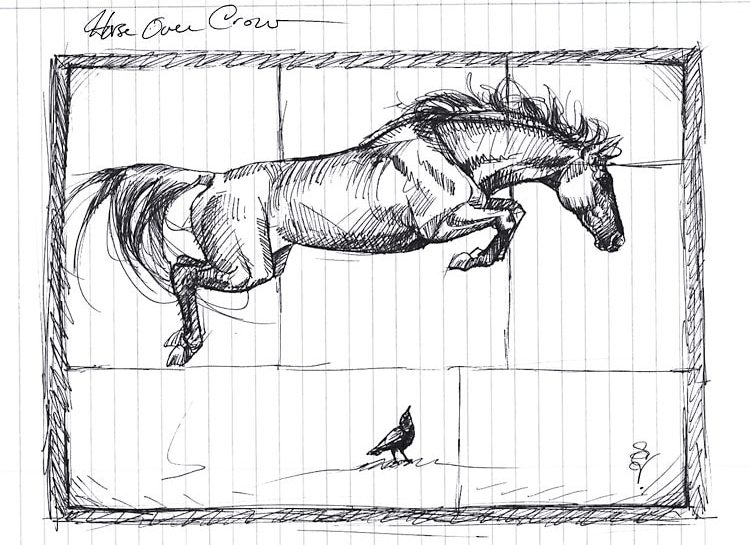 After establishing the composition and position of the figures in a sketch, I prepare my substrate at the actual size of the finished painting, in this case 36 inches high by 50 inches long.

After transferring the drawing at full size, I begin laying in the under painting. Here I establish the tone and color that will show through in the completed work. 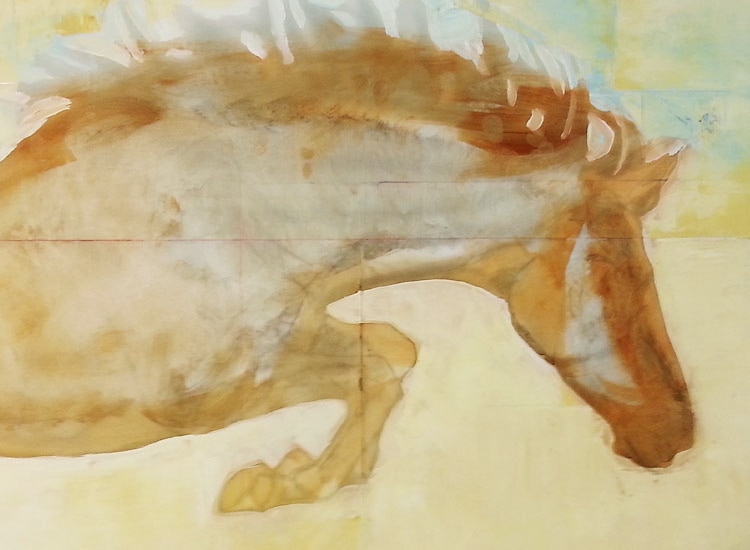 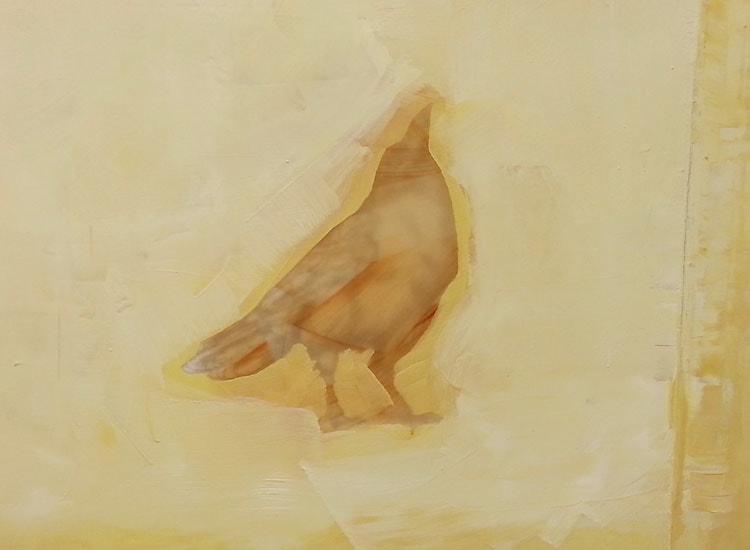 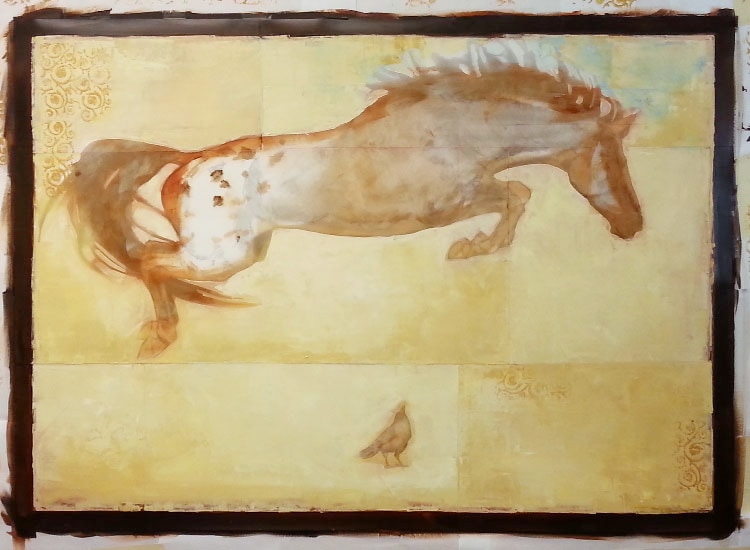 Having previously laid in the general hues and tones that will create the overall color for the finished painting, I now start defining the details of the horse and the crow. 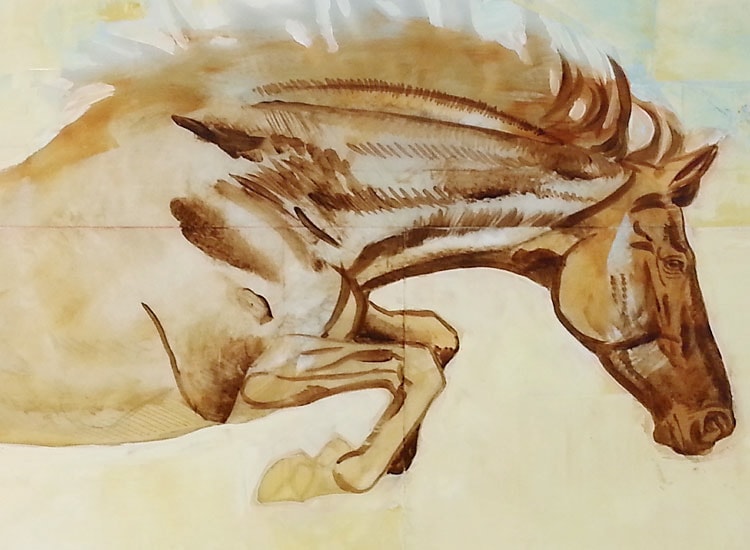 Having finished defining the details for both figures, I then come in with a wash of complimentary cool color that works well with the umber and sienna tones. 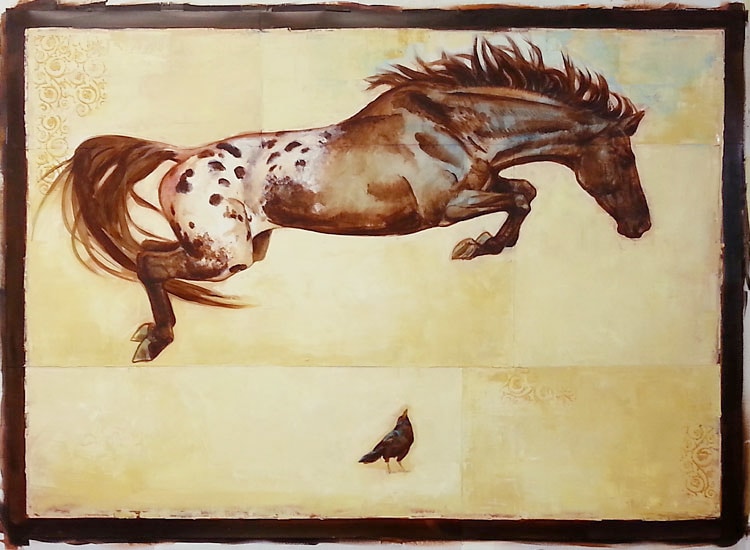 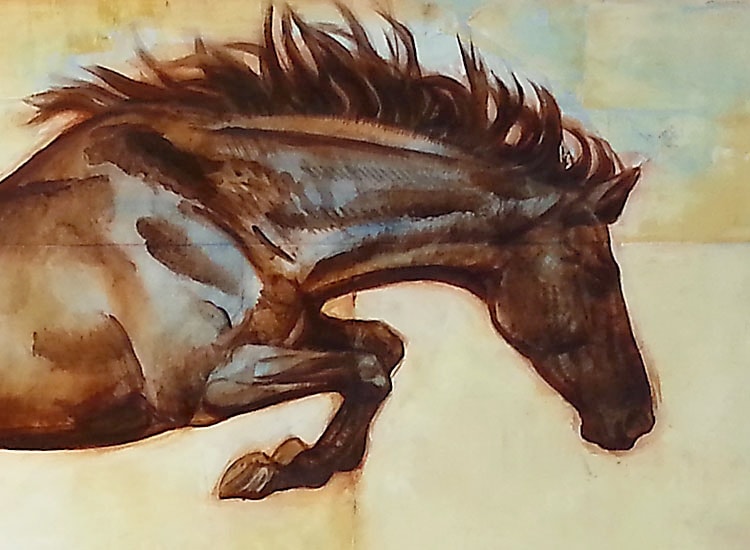 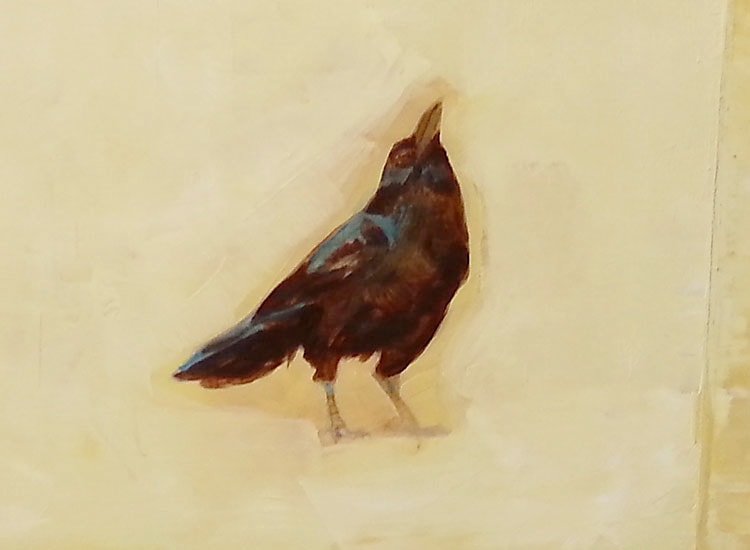 At this point roughly 10 hours have gone into the painting, preparing the substrate, transferring and refining the under-drawing, laying in the under-painting, and refining the figures’ details. The next and final stages of the painting involve further refinement, enhancement of existing hues, and lots of stepping away from the painting and staring at it to look for anything I feel is not cohesive with the finished work.

In addition to refining and completing the horse and crow, I also focus on adding more interest to the background. The pattern on the horse’s rump is called a “blanket”, a little implied symbolism as the horse forms something of a protective cover over the crow in this work. 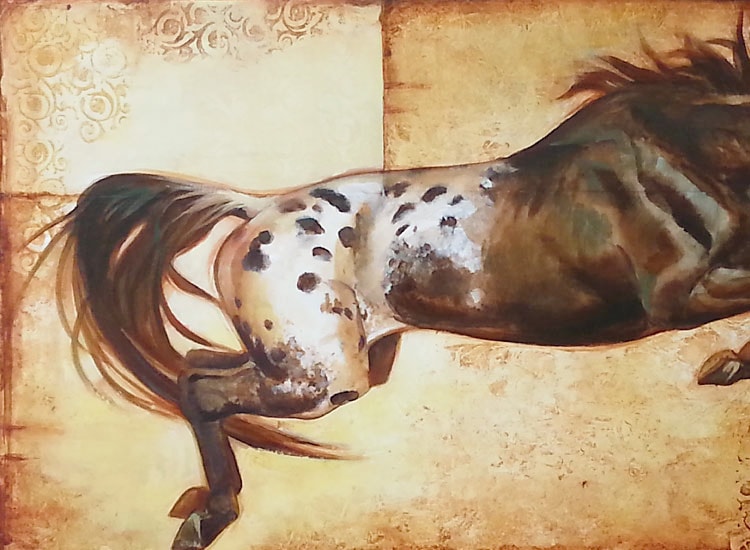 The goal of this painting is not “hyper-realism”, but to apply enough detail to the subjects to define them and give them dimension while leaving some organic, unpolished strokes. 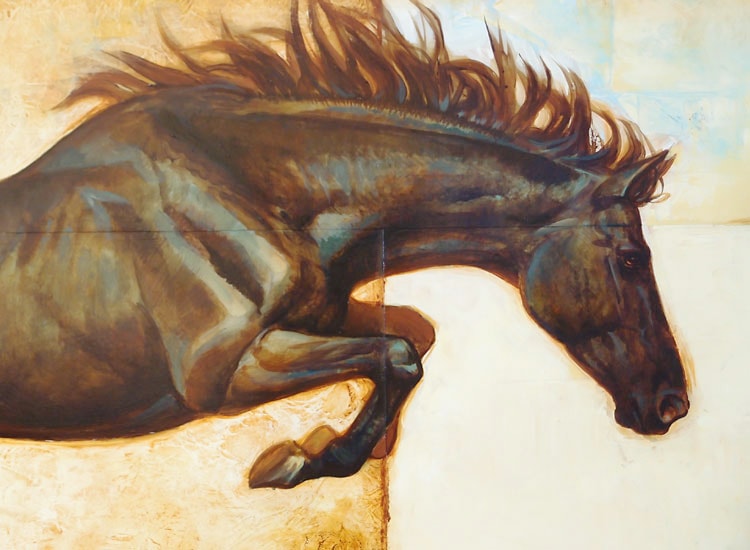 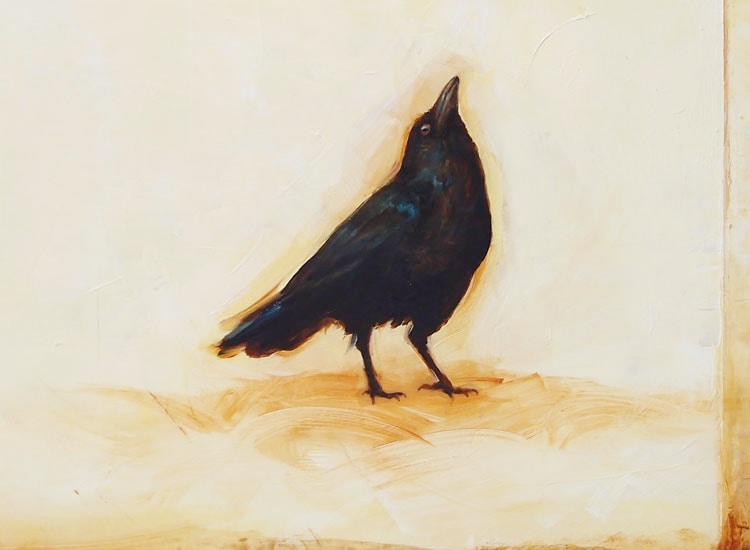 As a final step, an amber glaze is applied to the work to enhance its warmth, and the painting is now complete.

“Horse Over Crow is a sizable oil painting (36″ x 50″) rendered in rust and amber monochrome hues. In Native American lore, Horse and Crow often share an affinity. In this work, a Blanket Appaloosa jumps over a crow forming a protective arch, while the crow calmly watches from below. A patchwork of organic textures create a sumptuous backdrop to this pair, as hints of human touch fade in an out of visibility in the form of broken filigree patterns.” 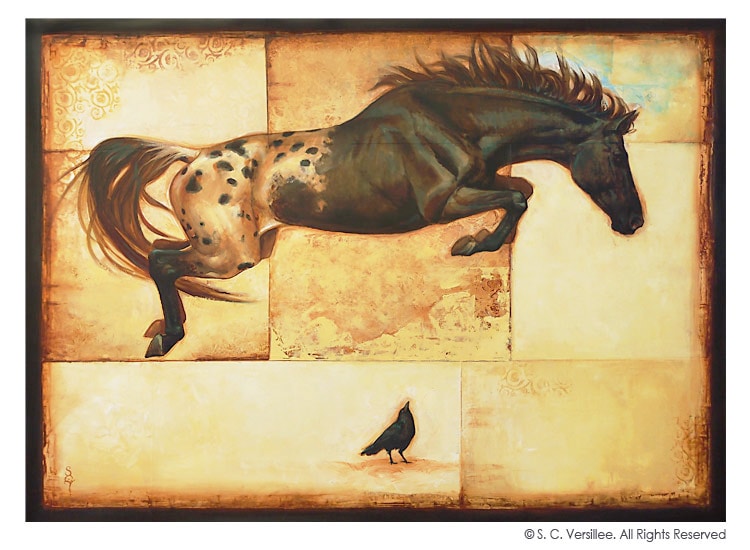