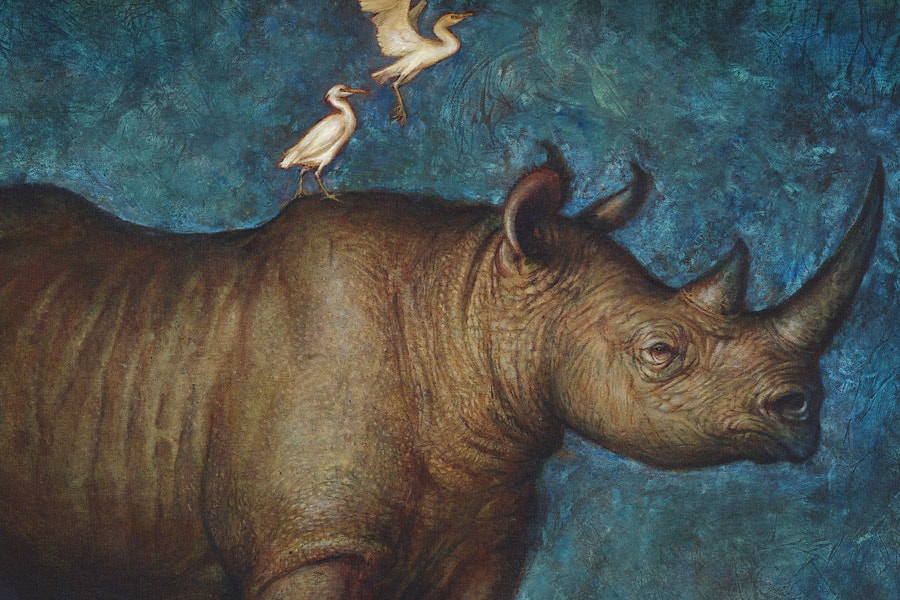 As I was completing this oil painting, the last male Northern White Rhino in the world passed away, a sad but powerful testament to the reality of human-driven extinction.

Annually, I try to commit at least one work of art to supporting an important social cause, and when the work sells, I donate a portion of the proceeds to an organization aligned with that cause. Proceeds from this oil painting will be donated to the International Rhino Foundation, a 501(c)(3) dedicated to supporting Rhino conservation.

The plight of Rhinos has haunted me for years because it is such an audacious and embarrassing display of our species’ proclivity for single-minded behavior and unmitigated greed. In part one of my work-in-progress post for this painting I shared some facts about how Rhino populations have fared against human interests.

Sadly, the illegal trafficking of wild life and wild life by-products is a multi-billion dollar international trade where rare and endangered species are merely viewed as a commodity:

Fighting against this tide are individuals and organizations who work tirelessly to preserve and protect the animals that remain, and with the sale of “Once, There Were Black Rhinos” I’m happy to do my small part to support their effort.

After building up the deep earth tones of the background, the last touch for this painting is reverse-texturing it with a lighter-tone coat of paint. I have a method I use called “texture stamping” that involves a sheet of crumpled material coated in paint that I repeatedly press to the substrate to build the desired effect. 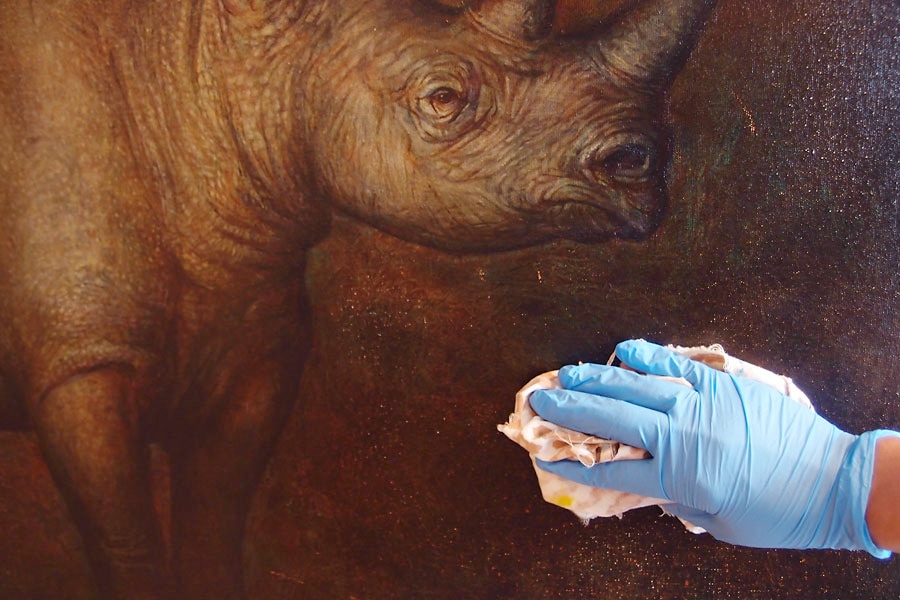 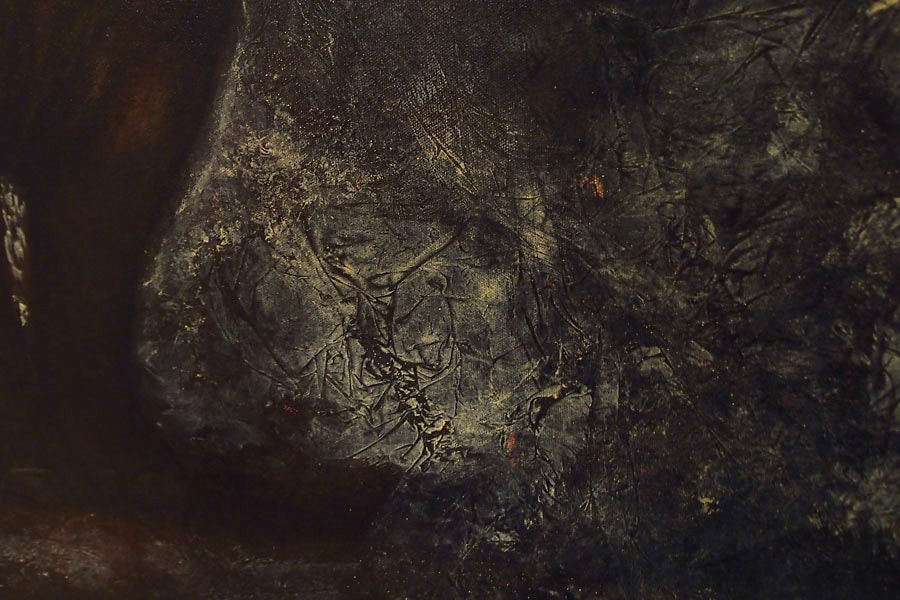 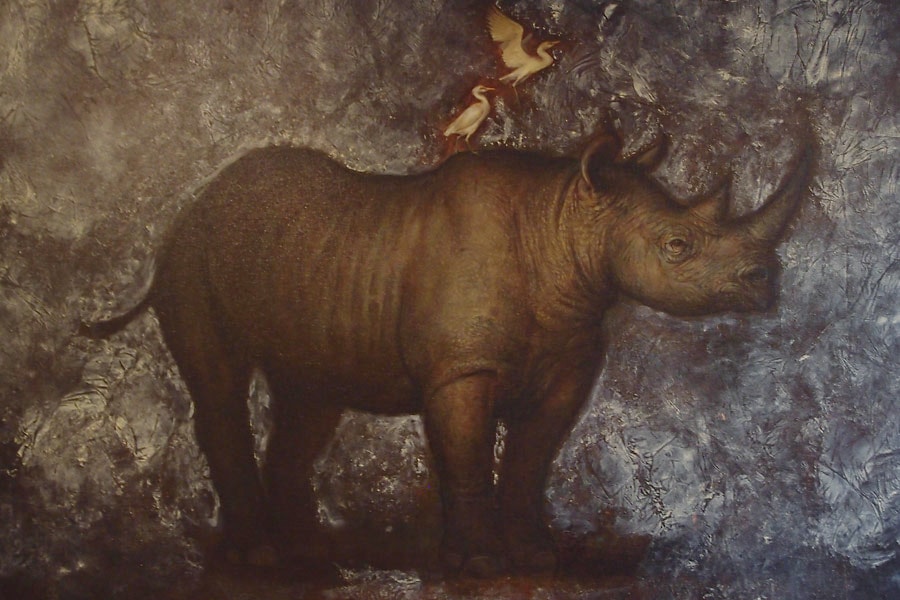 Once this layer is dry, I finish up by applying a complimentary blue wash to the background to create a cooler-toned contrast to the Rhino’s warm skin. This helps to lift both her and the egrets off of the canvas. She’s now ready to sell to support my chosen charity. 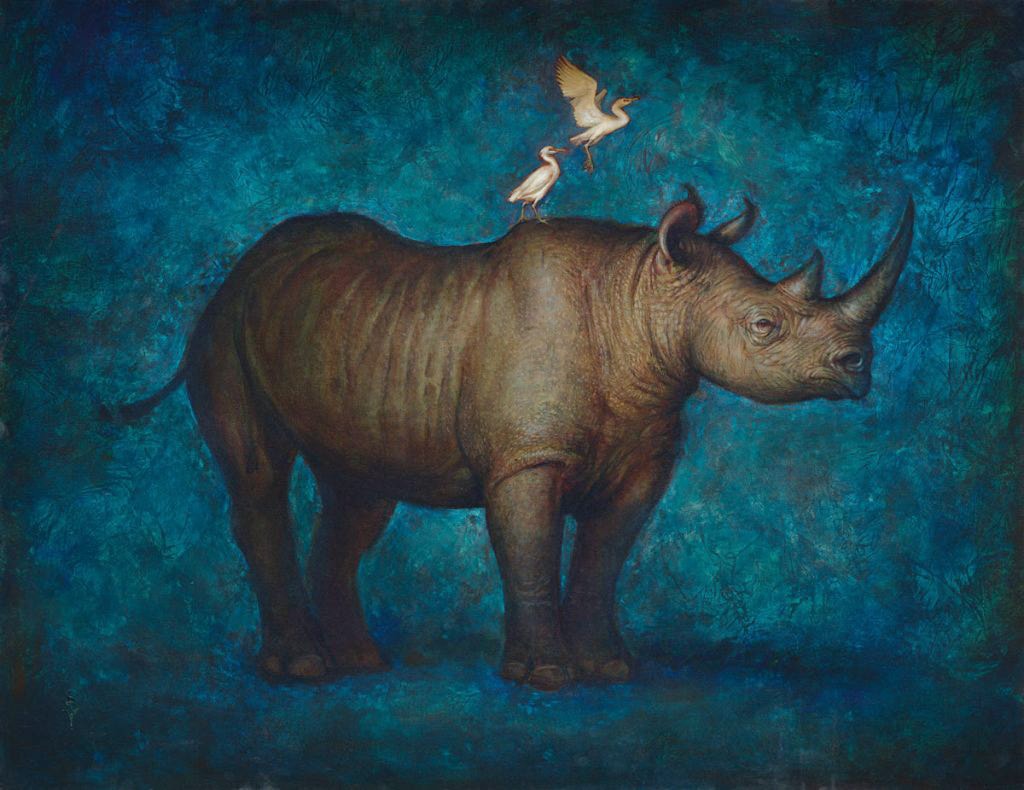 When I donate to non-profits I turn to Guidestar or Charity Navigator to make certain the organization I’m supporting is above board. Both Guidestar and Charity Navigator rate 501(c)(3) foundations on fiscal responsibility, how well a non-profit adheres to its stated mission, and how well a 501(c)(3) follows good governance practices that prevent unethical activities. The International Rhino Foundation receives top marks from both organizations, (the Gold Seal of Transparency and a 4/4 Star Rating respectively). 90% of donated funds go toward the foundation’s mission—conservation efforts —which is an excellent ratio for a non-profit.

IRF’s Development Officer, Maggie Moore, was kind enough to answer a few questions for me about Rhinos’ status in the wild and the work that the foundation conducts:

At this moment, how many Black Rhinos are left in the wild? How many Rhinos over all?
“There are between 5,042 and 5,455 Critically Endangered black rhinos left in the wild. There are approximately 29,000 rhinos (all five species) in the world today. An estimated 1,109 black and white rhinos were poached in Africa in 2017.”

How does the IRF fulfill its mission to help these animals?
“All five living rhino species (Black, White, Greater One Horned, Sumatran and Javan) are in terrible peril – from poaching, from forest loss and habitat conversion, and from human settlements encroaching on their habitats in Africa, Indonesia, and India. IRF works to protect particularly threatened rhino populations (and their habitats) in the wild, while also supporting management of and research on captive populations that will facilitate better management for wild populations.”

What is one thing a concerned person can do today to save rhinos and other impacted wild life?
“There are many things concerned individuals can do to protect rhinos and other endangered species:  donate money to organizations that protect wildlife, share information about rhinos and the threats they face, refrain from buying any illegal wildlife trade products, and encourage their governments to enforce laws against illegal wildlife trade.”

To support the IRF’s mission and learn more about their work, visit their website: https://rhinos.org/.

And of course, if you are looking for a striking original artwork to grace your wall, a portion of the proceeds from the purchase of “Once, There Were Black Rhinos” will be donated to the IRF.